Chapter 11. Why does a body eat more and breathe less?

It became crystal clear to me a few years ago that we humans should spontaneously be eating lesser and breathing more in order to attain and maintain Better Health…Naturally. This does not mean that we have to be on any special diet and use will-power to eat less, as that would negate the very purpose of the exercise. Because any ‘force on the mind’ will create additional stresses which will directly affect the movement of the diaphragm, and therefore, the health.

Spontaneously eating lesser amounts of food ‘without any kind of mind control’ but eating as much, or as little, as the body requires is the desired goal. 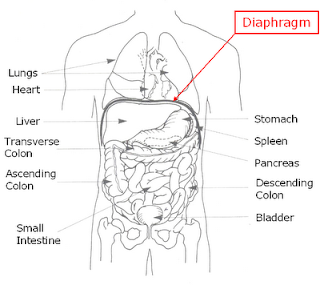 If we also look at the human body physiologically, then it is obvious that the diaphragm (and therefore the lungs) will function better if the stomach is relatively lighter most of the time. This generally is not the case as we tend to put additional food in the system even before the previous meal has been properly digested. A bit of research regarding the time it takes to digest different kinds of food will confirm this basic fact.

Food in the stomach actually restricts the movement of the diaphragm is what I have also observed.


****
I have also observed over a period of time that I tend to eat more (and therefore breathe less) when there are stresses in the mind. Why should this happen?

I believe that when we humans are not able to deal with the stresses in the mind, then a lot of energy (related to these thoughts) gets generated/accumulated in the mind/brain and needs release. This unreleased energy creates a pressure in the general area of the head, heaviness in the eyes and increasingly levels of discomfort, uneasiness and irritability. These symptoms, in my opinion, are being misinterpreted as hunger pangs and we tend to eat when we get these signals and not necessarily because our bodies need food in that moment.

What happens next, I believe, is that this unreleased energy is then diverted towards digesting the food as that becomes the top most priority for the energy – any available energy – in the body.

Another way of dealing with this unreleased stuck up energy is by indulging in some activity that requires a lot of energy e.g. physical work, brisk walk, vigorous work-outs etc. This fact has been discovered by others too especially by those who habitually hit the gym at the end of a stressful day. They feel better after doing their rounds of working out. They also tend to eat lesser on days that they work out as compared to the days when they do not exercise. Sounds contradictory – but then this is a fact. I am not even touching on the aspects of moodiness, irritability, lethargy etc. that sets in on the days when they do not workout.

Vigorous exercise requires a lot of energy as does undigested excess food in the stomach. Contrary to popular belief, not all foods generate energy immediately. Fruits are the only items of food (and that too when taken on an empty stomach) that start releasing energy within 15 to 30 minutes of having eaten them. The regular cooked heavy, deep fried foods that make up our general diet actually need a lot of energy before they are useful for the body.

I have also observed that I do not want to eat fruits whenever I am stressed. It is heavy deep fried and maybe non-vegetarian food that my body craves for in these moments.


****
To sum it all up, a mind under stress ‘forces’ the body to ‘eat’ more so that the stress is taken care of temporarily as the energy of stress gets diverted to digest this additional food in the system. More food in the stomach then restricts the movement of the diaphragm and it functions less efficiently.

The root cause of the problem are therefore the stresses in life which cause us to fall in the trap of eating more and more and at the same time the body ends up breathing less and less.

No wonder, most of us humans are not healthier…naturally.