Healing vs. Acceptance – The Energy Dynamics behind any Healing Process

In this post, I wish to share my understanding of the energy movements during any healing process, be it conventional or non-conventional. This will come in handy when we discuss the issue of Acceptance.


But before that, the belief systems of Karma/Fate/Destiny and that of Duality need to be examined here.
Karma:


Karma, in my opinion, is a kind of a spiritual carrot being used to lessen the impact of suffering in good, god-fearing human beings. Believing in Karma, Fate, Destiny etc. does help because the good humans then stop asking the question, “Why me?” The answer anyway is not easy to understand with the old human consciousness.

But Karma / Fate / Destiny etc. are terms that spiritual pundits and the gurus use to keep their followers under control.

In a way believing in karma does help because it brings a negative passive acceptance; the ‘suffering’ is not challenged then. This kind of acceptance does give the strength to somehow bear it.

While the explanation that ‘God is punishing you for sins committed in some past life’ was acceptable not too long ago, it no longer makes sense to me.  The reality is that I was not comfortable even when I did believe it.

I realised that the same persons who uttered these words had no hesitation in also saying, ‘God is merciful and does not judge and forgives everyone’.

This really had me confused. Was I being forgiven or was I being punished?

The new thought ‘I am free from all past life karmas’ made a lot of sense to me. I accepted this rather easily.

This indeed is my belief system now. Absolutely! This will not - can not - change, no matter what happens to me from now onwards. This is my new consciousness.

The older belief systems that may have worked for me in some past life-times, if any, have been totally released. If others continue to live with those, so be it and their journeys are also honoured.

The new belief-system does not make me better in any way whatsoever. More at peace, definitely, but better? No way. I am that I am.
* * * *
Duality Energies:

The duality energies of Positive and Negative; Good and Bad; Darkness and Light; Strong and Weak; Healthy and Sick, like all other duality energies are ONE and not TWO. They co-exist as in two sides of the same coin. A coin is not going to be complete if one of the two faces had nothing embossed on it.

The duality energies have always been together in universe (can not have day without night) but there was a split as far as human consciousness was concerned.

I too believed that Darkness and Light were separate as graphically represented by the following two circles. 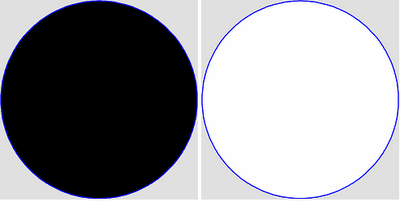 Healing according to the old belief system meant that I had to remove the darkness and replace it with light. This indeed was the intention as no doubt still is of many healers/channels across the world.

This worked at times. But there were also situations when the problems that I had thought were healed came back almost overnight. I admit that it was a bit perplexing whenever this happened.

Faith also took a beating in moments like this.

* * * *
But these dark moments were also wonderful as they opened me up for accepting the new belief systems.

The energies of Darkness and Light were not TWO but ONE which was contrary to what I had earlier understood. The true meaning of the ancient yin-yang symbol hit me the moment I accepted this belief system. 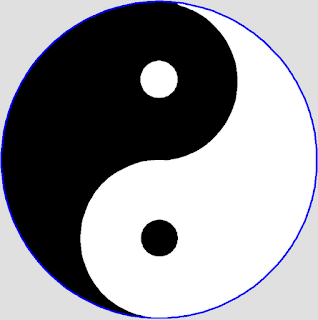 The reality is that we can not have Good, Strength, Light etc. without having the opposite sides, the other face of the coin, so to say. Good/Bad, Dark/Light, Positive/Negative, Up/Down etc. are together and always have been.

This is now the new consciousness. These concepts were known but not really understood for what they really meant.

As a result, Darkness is no longer being rejected but accepted to be an integral part of Creation.

The ones living with this consciousness are also accepting Darkness by default. The earlier struggle of trying to end Darkness in Life is gone. This consciousness is now spreading from a few to many. It will take a bit of time before ALL humans can integrate this. That anyway has been the case whenever some major shift has occurred in human consciousness. Everyone does not integrate all new belief systems simultaneously. It just is not possible.

There was a time on planet earth when eating raw meat was the norm. The one who accidentally discovered that meat cooked over fire becomes tender and also lasts longer moved into a different consciousness. But all humans who were walking on earth (at that time) did not start cooking their food simultaneously.

Likewise in the present scenario, only those humans who are ready for this shift to happen will move into the consciousness of no longer getting disturbed by the ‘negative’.
* * * *
How will this knowledge help?

Well, for starters this means accepting that Good Health and Bad Health coexist. Being in a Painful state or a state of Painlessness is the same thing. (I will not blame you if you are thinking that this is absurd and that I am crazy. But please bear with me, I'll come back to this in a moment...)

I will expand on the concept of yin-yang a bit more as this too fails to explain how transformation from light to darkness occurs and vice-versa.

There are not two energy components as is believed but rather three - dark, light and neutral. I have re-worked the original symbol in order to explain this. The modified symbol, according to me is: 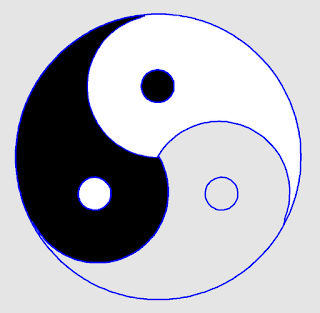 While Dark/Light are integral and in a way fixed, it is the neutral component that has the ability to change its attributes. It is the effect of the neutral that decides whether we are experiencing the positive or the negative in any duality situation at any given moment.

When the neutral transforms to Dark, we experience two parts of darkness which makes darkness sixty-six and two third. Although it might feel in that moment that Darkness is 100% in our lives, it NEVER is. There always is one-third Light hiding just behind the Darkness. I have explained this graphically below by the two symbols:

Ditto that for situations when we have Light in our lives.

The other face of the coin is very much there; it is just not visible in the moment.
(I will be glad to email the power point presentation that I have made which explains this in detail. Please email me at surinder@aashirwadhealing.com)

Healing according to the New Consciousness:

So what we are experiencing at any point in time is not 100% but only two thirds of that experience. The reality  changes when the neutral starts changing its attribute. Good times as well as Bad times don’t last, right?

This is what happens whenever we have the experience of having been healed – whether it is through medication or meditation; OR with Reiki, Crystal or any other so called alternative therapies.

The neutral component which was acting Dark transformed to Light.

This in effect means that whenever our Headache (for example) has been taken care of with medicines, rest or healing and we start having the experience of No Headache, the ache is still there. It is not in our conscious awareness, that’s all.

Reiki channels who have had the experience of problems that they thought were healed, coming back, now know why? The Neutral that had become Light has changed colours again, that’s all.

So when the pain is not being felt, the potential for it to come back is still there.

Logically, so when this belief system is firmly in place, then ‘healing’ is just a matter of ‘converting’ this Neutral part from the Negative role that it is playing in the moment to Positive.

This, by the way, requires lot less effort and time when compared to the old method of removing all darkness and bringing in light.

Till then all is well!