A bit of tweaking my food and a slight change of lifestyle has brought the blood sugar levels down from the previously recorded highs to what are considered to be relatively safe zones. I don’t really know at this point whether anyone else can also duplicate these results. At the same time, I see no reason why someone can not. In any case, this is what has happened with me over the last month or so…
The following was the state of my blood sugar as observed on various occasions between May 2010 and the middle of June 2011: 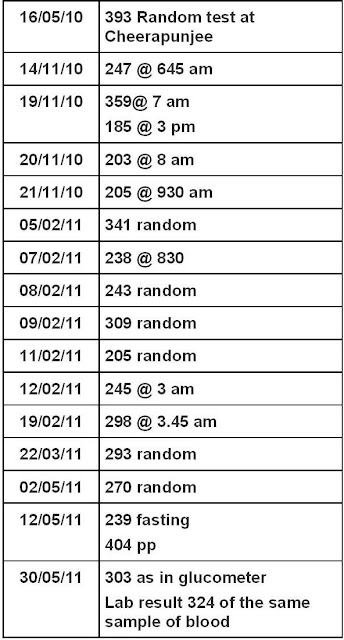 As already reported, the blood sugar levels observed on June 29, 2011 (at the end of my two weeks stay at Ratanveer Nature Cure Centre) were 94 fasting and 131 pp.

I figured that if I could bring down the blood sugar in a short period of two weeks, then I could mess it up as easily. So I let things slide by returning to my formal lifestyle and this is what happened to the sugar levels checked on the following dates. 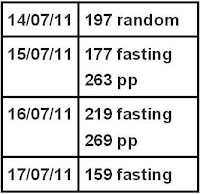 I then proceeded to make just a small change of eliminating all the sugar from my diet for a short period of 6 days. For the record, I generally take three cups of tea/coffee during any given day and an occasional ice-cream / chocolate / something sweet in the evening but not everyday. I totally eliminated the latter for the week and took tea/coffee without sugar for JUST 6 DAYS. This resulted in the blood sugar coming down all over again at the fag end of the week. This was confirmed by the tests conducted during the period 18/7/2011 and 23/7/2011. The result of 93 was obtained last Saturday and it was party time over the weekend. [BTW, I have been posting these results regularly at my other blog]

* * * *
The week that started on July 25 was even better as I did a bit of partying during the week too. The rest of the days, I was generally on fruits at breakfast and lunch time.  I also did not feel like taking any tea/coffee while at work.

The ease with which I have been able to move the blood sugar both ways has left me wondering as to why people take medications at all for doing this. Not only am I not taking the medicines which might be playing a big role by contributing directly to future ailments, I am also feeling a lot lighter than I did about four weeks ago with these small changes.

If high blood sugar level is really a problem, then a common sense and obvious approach for solving it would be to work at the root cause(s), right? But that is not the way the allopathic form of treatment works the guiding philosophy for which is to treat the effects rather than the cause(s).

I think it is time that we did a rethink in the way we have been approaching this high blood sugar situation.

For starters, I would like the ones who are directly or indirectly involved to look at how www.diabetes.org describes this situation:

Type 2 diabetes is the most common form of diabetes. Millions of Americans have been diagnosed with type 2 diabetes, and many more are unaware they are at high risk…

In type 2 diabetes, either the body does not produce enough insulin or the cells ignore the insulin. Insulin is necessary for the body to be able to use glucose for energy. When you eat food, the body breaks down all of the sugars and starches into glucose, which is the basic fuel for the cells in the body. Insulin takes the sugar from the blood into the cells. When glucose builds up in the blood instead of going into cells, it can lead to diabetes complications.
The message coming through from this (as well as other write-ups) is that there is something basically wrong with the human body when “Either sufficient quantity of insulin is not being produced or the body’s cells are ignoring the insulin.”
* * * *
I have taken the liberty of reading between the lines and then breaking down the above description of Diabetes into smaller points that I could easily understand.
I - We eat food which is broken down into its various components to be used by the body. All the sugars and starches are broken down into glucose which then goes into the blood stream to be transported to the body’s cells.
II - This glucose is the basic fuel for the cells in the body and therefore the more, the better as long as it goes where it is needed.
III - Insulin (from the pancreas) is necessary for moving the glucose (blood sugar) from the blood to the individual cells.
IV - When there is either a shortage of insulin or the cells ignore the insulin, the sugar levels in the blood go beyond an accepted benchmark.
V- This benchmark for the Blood Sugar Level is the SAME for all human beings irrespective of their age, height, colour, sex, body weight and does not take into account whether they are athletes, scientists, spiritual or energy workers, healers, doctors, engineers, farmhands, coolies etc.
The belief system is that the blood sugar level should not fluctuate outside two rigid boundaries of acceptable minimum and maximum which are the same for everyone all the time.
VI - Please note the words in the key phrase in the description about Diabetes: “EITHER the body does not produce enough insulin OR the cells ignore the insulin”.
This means that the reasons for the blood sugar levels going up have not been scientifically discovered - yet.
VII- IF the blood sugar levels go up beyond the acceptable levels, then this situation is opening the doorways for future complications of the eyes, kidneys, heart, legs etc.
The focus of treatment via the allopathic system is on fixing the blood sugar once it goes beyond the acceptable limits and not controlling the inputs. Sure the specialists do recommend weight management and diet control but this aspect is not really being treated as seriously as it should be.
The questions that my simple mind was forced to ask were:
A -  Why control the bloody output? Why not control the inputs?”
B - Can it not be that the pancreas is being expected to produce insulin beyond its designed capacity?
C - What about the body cells which are expected to absorb, i.e. take in all the sugar that we consume? Are we then not making the situation worse by forcing the sugar into the cells by taking medicines, insulin etc. when it is maybe not meant to happen?
D- Does it then not become the job of the kidneys to filter out all the extra sugar and throw it out of the body much like the food pipe does to the food that we can not digest?
An analogy that came to mind straight away was what would happen if the legs were not able to follow the basic command of “Run/walk a little bit faster”? Or what would happen if the arms were required to lift a weight that they just can not do?
What will we do in these scenarios?
I had these in mind and also the belief that the pancreas can not alone be held responsible for not being able to control the blood sugar level when I started going about making the little changes in my lifestyle. I was able to make these changes as there already was a desire to do so.
At the same time, I also know deep inside that both the detoxification phases and the blood sugar levels are somehow deeply interlinked. The downside of the changed lifestyle is that both the frequency as well as the intensity of the detoxification phases has gone up. Thankfully, my healing abilities are helping me tide over these phases which can become a bit uncomfortable.
As informed previously, I am not yet taking any medicines but am thinking of starting them for the purpose of my experiment. I hope that this will help me understand the effects of the medicines on both the detoxification as well as the blood sugar level. This I guess will be in the next phase of my experimenting.
In the meantime, I will continue following my approach of the last couple of weeks, which has been to control the inputs on weekdays while having a blast on weekends and other special occasions.  This apparently is working as the sugar levels are more or less in my safe zone.
Ultimately if high blood sugar is really proven to be the problem that it has been widely accepted to be, then I think that I would rather follow this new lifestyle for the rest of my life than be on medications. I have no desire to become a slave to something that is not natural.
Like everyone else, I want to have the freedom to live and enjoy a healthy life the way that I want. This would include eating an occasional pizza with beer and of course the yummy cakes that my daughters bake without worrying about the calories and the chocolate and all that cream and icing on the top…
And so it is.