Chapter 9. The Mechanics of Breathing

We all breathe. But for the majority of human beings, it’s just another of those biological processes that is just happening on its own inside the body and therefore is being taken for granted. Most of us, therefore, do not ever stop to think whether or not we are doing it right. The fact is that most adults do not breathe the way that nature intended. Incorrect breathing is the root cause for all our physical ailments.

I too used to breathe the way the vast majority of humans are doing, till I learnt otherwise. I happened to read somewhere a few years ago that the Diaphragm is also known as the Spiritual Muscle. I was aware about its existence but the fact that it was also called a Spiritual Muscle was brand new information for me too. Must be pretty important, so I thought and this set me doing a bit of research regarding this little fella. I have now realised after reading what I could and also after observing my body as it goes through its changes that this is THE MOST IMPORTANT EQUIPMENT in the WHOLE HUMAN BODY. Fix this one muscle in the body and get it working better and as close to the way as nature intended it to and presto; the whole body fixes itself, so to say. Almost effortlessly, you can say.

I share here the very basic information regarding breathing and how this one muscle controls the well being of a human being. This basic knowledge available in a standard VII text book actually did help me in a big, big way. Wonder why I did not realise this earlier in life!


* * * *
Everyone knows that we breathe through our lungs. Lungs are important, alright, but work rather inefficiently without the proper help of some other significant parts of the body. These are the Skeletal elements, the muscles of the ribcage and Diaphragm. It should actually be THE Diaphragm. Of course, the human mind and the brain are important too, considering the fact that it is the brain that ultimately controls the movement of this rather important Spiritual Muscle.

Human Lungs are two sponge like sacs that fill up most of the space of the chest cavity. They are contained in a pleural sac which is attached at the bottom to the dome shaped Diaphragm, which separates the pleural cavity from the abdominal cavity. 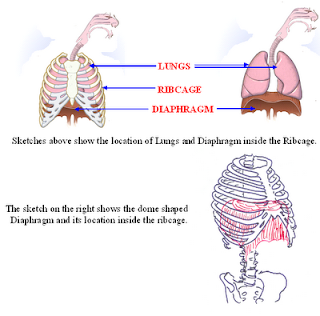 Breathing in (inhalation) takes place because of the working of two sets of muscles: A) the intercostal muscles between the ribs and B) the diaphragm. Upon receiving the appropriate signals from the brain, the intercostal muscles contract and push the (upper) ribs outwards and upwards. Simultaneously, the diaphragm also gets its signal and should ideally become flat and push the stomach out. The combined action of these two different sets of muscles creates a vacuum in the pleural cavity because of which the atmospheric pressure becomes lesser inside the lungs as compared to that outside the body. Air from the surroundings then rushes in through the nostrils (or mouth) down the trachea and into the lungs. The reverse activity takes place during Exhalation. 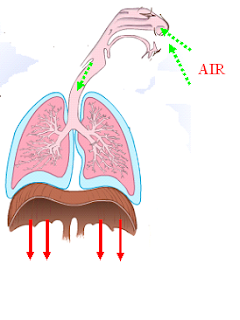 Please notice the use of the word "should" above while referring to the movement of the diaphragm. It should become flat but does not do so in the majority of adults. They 'suck' the stomach in and push the chest out while inhaling. The stomach should get pushed out gently along with the upper chest when the diaphragm is contracting downwards thus creating the vacuum inside the chest. The fact that the stomach should be pushed out while inhaling can be easily observed in infants, especially when they are lying down.  That is the way nature intended it to be.

Please also notice that because of the conical shape of the lungs, there is lesser volume at the top and more at the bottom. Because the stomach gets pulled (or sucked) in while inhaling means that majority of humans are not using the larger volume available at the bottom of the lungs during respiration. They therefore are not breathing in as much of energy (pranas) and oxygen as is potentially possible. They end up spending maximum amount of energy (required for the movement of the muscles) for minimum gain. The logic behind this behaviour is indeed strange considering the fact that humans are said to be the most intelligent creatures walking on earth! But then majority of humans are just plain ignorant about this most important aspect about their health.

Role of the Mind:

The movement of the diaphragm is controlled by the small portion of the brain known as Medulla Oblongata. 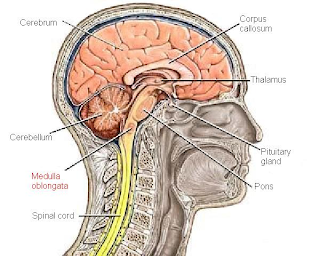 I have been observing my state of mind and the corresponding breathing activity for a bit of time now. I have noticed that I happen to take shallow breaths when my mind is tense. Breathing becomes deeper when the mind is relaxed and comfortable. The movement of the Diaphragm is therefore controlled by the Mind through the Medulla Oblongata. I do not enjoy Life when there is tension in my mind is something that goes without saying. I also happen to have more energy for all the important activities in life when I am relaxed and comfortable in Life. Obviously, Deep Breathing is THE activity that has numero uno priority in my Life.

The ultrasound test that I got done on June 11, 2005 revealed the following:

This validated the journey for me from where it had started in 1993. All the efforts that have been put in seemed worth it. This also was a turning point of sorts for me in my life, as far as the journey towards achieving a state of Better Health... naturally is concerned. 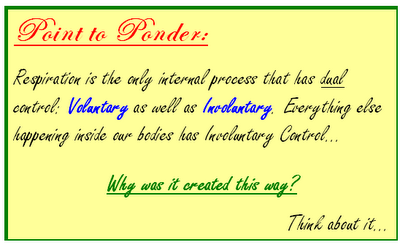