Is High Blood Sugar Good or Bad? - I

The following readings on my Glucometer are the results of actual tests conducted recently by me on blood samples drawn from my own finger tips. These readings may be disturbing to a few close friends and relatives, and rightly so. But is high blood sugar really all that bad as it is made out to be? The evidence that I have on hand is forcing me to believe otherwise… 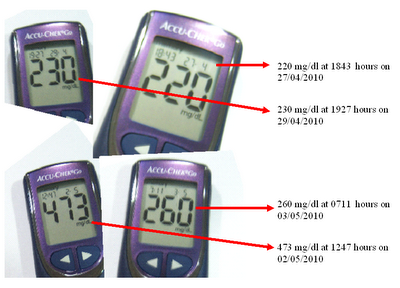 I do believe that people showing random blood sugar counts of 300 + can not walk on their own to a hospital but need to be carried in. However, I was in complete control of all my faculties even while my body was showing an abnormally high count of 473 just the other day. As a matter of fact, it was like any other day at work.

I first learnt about my high blood sugar about a couple of years ago. I admit that there was a bit of fear initially and the first reaction was one of panic. I made a choice of not embarking on the laid down routine of medical intervention, the reasons for which I will be sharing in later posts. I cleared up my mind to start with and then started observing what was happening to my body and mind. In the meantime, I also experienced the various known symptoms of diabetes and then also learnt how to deal with each and every one as they have come up. This has allowed my mind to reach the comfort zone that it is in right now. Of course, the background of over a decade and a half of energy working has also proved beneficial. Based on the knowledge gained during this period of time, I can safely conclude that high blood sugar is actually not as bad as it is being made out to be.

On the contrary, I know that this situation is actually good for my system.

And to answer a question even before it is asked – NO, I am not taking any medications even now to control this situation.

I wish to share this knowledge with the readers of these pages. As a word of caution, however, please do not blindly try to follow what I have been doing as there are lots and lots of things that need to be learnt, lots of muck that needs clearing especially from the mind before doing something as drastic as going off medications totally.

I know some may consider me a bit insane to have actually allowed things to go this far but believe me when I say that I am not putting my body through any kind of strain and discomfort normally associated with Diabetes.

I know what I am doing and thankfully have my Better Half supporting me unconditionally – like always – through this wonderful and important time in life. [Thank you dear for the trust and the confidence in our journey. I know that you know that I am not putting my life out on a limb.] Hopefully something wonderful will emerge from this research too.


***
Let me start by sharing a story regarding this middle aged lady who learnt Reiki from me back in 1998 or thereabouts.

She sounded hysterical when she called me a couple of years later and reported that her Blood Sugar had gone through the roof. This had happened in spite of all the hours spent doing Reiki and Crystal therapy on herself. It turned out that the blood tests had been conducted following some dental problems.

When she had first come to me about two years earlier, she had a random blood sugar count of about 150 mg/dl or thereabouts and the same was now in the range of about 200 mg/dl which was pretty high by any standards.

I did know a bit about her family and after calming her down asked her to recount the facts of her life before and after learning Reiki and Crystal therapies.

She recollected that earlier she had to literally force herself out of bed every morning at about 8.00 AM and then too with a heavy head and absolutely with neither the desire, nor the energy to do anything. After pushing her body through the routine of housework, cooking, breakfast and lunch, she had no option left but to take an extended nap in the afternoons before forcing herself out of bed for the evening routine. Predictably, she used to have no energy left at the end of the day and it was bedtime by about 10 PM everyday.

She had two daughters; the elder one already married a couple of years before they all learnt Reiki. The younger one got married later and had also been blessed with a baby at around the time that this story was unfolding.

After learning the therapies, the same lady was now able to get out of bed by about 6 AM, freshen up and finish her self healing morning routine before taking up the house hold work. After finishing the duties at her own house, it was off to her younger daughter’s home to take care of the needs of both the mother and the new born. After doing the tidying up, bathing the baby and a bit of cooking for her daughter too, it was back to her own home for her afternoon meal and a bit of siesta. Early evening time was reserved for the crystal therapy before tackling the house work of the two homes again. Bedtime now was usually later than 11 PM and it was back to the next day’s routine at 6 AM.

The fact of the matter was that while her blood sugar count had apparently increased, the quality of her life had undoubtedly improved. She was much more energetic, to say the least, and was for once happy doing something for her own self too.

Yet, this increased blood sugar was a bit disturbing to her and she had come looking for some solutions. In order to allay her fears, and in order to really get to the bottom of this, I told her to stop the Reiki and Crystal therapies for a short period of 5 days only and then go for re-tests from the same lab. The logic being that the effect of the healing therapies on her system, if any, would taper off during this time and the test reports would then show her ‘normal’ blood sugar levels when no energy work was being done.

She reluctantly agreed to stop practicing Reiki and Crystals and went for re-tests five days later. She reported back findings in the range of 130 or so from the same lab and this was something that she could live with.

Result of this experience: Her confidence in the therapies was restored. She also understood that it was perhaps the detoxification that she was going through that was getting interpreted as ‘higher blood sugar level’.


***
The fact of the matter is that I have noticed that both the Blood Sugar and the Blood Pressure levels are known to go up after regular sessions of energy working especially with Reiki. I have been told that the same happens when people start practicing Yoga too. This however, needs verification.

That the blood pressure level does go up immediately after exercising the body is a known fact but this is actually considered as being good for the human body.

But as far as Blood Sugar levels are concerned, physical exercise is recommended for controlling the blood sugar. This too goes up after energy working and therein is the controversy. A bit of scientific research is needed regarding this apparent contradiction. It is to that end that I find myself involved in the current research on my own system.


***
Coming back to my present reality – well I can not go back to stop doing what I am doing in order to cross verify my own ‘normal’ blood sugar levels. I am too far gone on this path to ever think of returning back. My breathing rates have been drastically reduced over the years and I am generally breathing in a lot more oxygen than I used to. This in turn is helping my body produce more and more of energy which then is working to remove the remaining toxic deposits from my system. The generally relaxed state of mind that I have gotten used to will also not allow me to go back to being the old self. I still manage to blow my top off, once in a while, but I am okay with that too…


***
In the meantime, I am going to take regular measurements with my Glucometer as well as with the Blood Pressure monitor and start posting the findings online regularly. I will be doing a bit of video recordings of the tests whenever convenient, for the records. I will also note down the breathing rates along with the details regarding the food etc. that I will be eating.

An important aspect, according to me in this study, is also the state of the mind as stress and blood sugar levels are known to be directly linked. So I will also try to give feedback regarding my mood swings, the tensions and stresses in life etc. I understand that it might be a bit difficult to be very accurate about this aspect but then that’s the way it is…

The thought just occurred to me, as I am writing this, that I should join a gym for some physical workouts and then record the variations, if any. I might end up using a bicycle maybe but that will happen when it happens if at all it is needed …

I will also be posting details regarding how this situation has evolved over the last four to five years or so. There is lot more to come so watch these pages for more…