The following article appeared in the Ahmedabad Edition of The Times of India, 25 April, 2010: 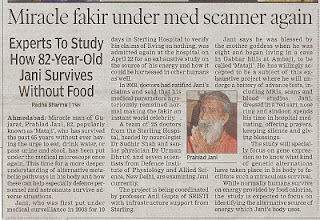 I remember  a similar research was conducted on the same person at the same hospital back in 2003 also.
You can read all about it at:
http://timesofindia.indiatimes.com/city/ahmedabad/Wonder-diet-Living-on-thin-air/articleshow/295761.cms

There is also the case of Shri Hira Ratan Manek who was also the object of a study conducted by Dr. Sudhir Shah back in 2001.
You can read about it at:
http://home.iae.nl/users/lightnet/health/lightresearch.htm

I think that the Doctors and the Scientists will not find anything until and unless they shift their perspective from the Physical Body to the Consciousness and the Belief Systems of the individuals being studied.

Anyway, I am waiting for the results to be made public as this issue is quite close to my heart too.