3:30 AM on March 17. 2012 was a defining moment and a very gratifying one for me as this moment validated our journey of attaining better health...naturally in a huge way. This was the moment when our long drive which had started at around 10 AM the previous day from Ahmedabad ended in NOIDA.

The body was just a wee bit shaky and needed just a couple of minutes to come back to normal but the mind was absolutely fresh. I knew in that moment that I could continue to drive for a few more hours if that was really needed. The fact was that the last seven and a half hours of this road trip were practically non-stop with me behind the wheel and no one in the family, i.e. neither my better half nor our younger daughter needing even a washroom break.
This experience proved that my legs, back, abdomen and especially the mind were better than what they had been a few years ago. Especially after going through the experience of severe pains in my right leg that I lived with recently that I have already shared in this earlier post!!
In that moment, I also knew why the alternatives of air/rail travel were not given any serious thoughts. How else could I have experienced all this???
It had taken us about nine and a half hours to cover the first 600 kms of the Ahmedabad - Delhi highway that included a couple of washroom/fuel-tank top-up breaks. Our only long halt of about 35 minutes was when we stopped for dinner at about 7:30 PM. The remaining 350 kms took us about seven and a half hours to travel. We did not expect the bumper-to-bumper heavy commercial vehicular traffic in the middle of the night on the Jaipur-Delhi highway that is also undergoing major renovations. Thankfully we were not aware about these as they might have acted as a deterrent, had we known about these factors in advance.
The fact that we were up at around 8 AM the next morning (after turning in only at around 4:30 AM) and were able to take care of what we had gone to do is also an indicator of the tremendous reserves of energy available to humans but seldom tapped into because of the limitations of the human minds.
I have done my share of driving on the Indian roads but this was totally new for me too. Others may have the kind of stamina to drive long hours but I definitely did not know that I had it in me to remain seated for such a long period of time at one place.
How did I do it? Moment to moment and one breath at a time. My wife has been ribbing me ever since. She says that I must have been a truck driver in some other incarnation. I am not challenging that and for good reason!!! Driving gives me the opportunity to turn totally inwards for long periods of time. I love the silence within in these moments. Extended meditation, one can say.
The return drive on March 21, 2012 was covered in about 16 hours that included an extended one hour forced stop while we waited for brunch to be served. This trip was uneventful and rather easy as the maximum time behind the steering wheel at one go was about five hours only.
* * * *
Besides bringing back the excess stuff belonging to our elder daughter who vacated her hostel room on March 17, 2012, we were also able to bring two djembes that we had bought in Delhi. I am sure we would not have been able to do this, had we travelled by rail/air. So this was the bonus for the family and is also a forward movement to the drum circles idea that I am now seriously contemplating.
* * * *
I was also able to catch up with a couple of old college friends who I had first met in 1978. It was a bit of an afternoon party which we thoroughly enjoyed. I am posting one picture here sans the beer mugs. 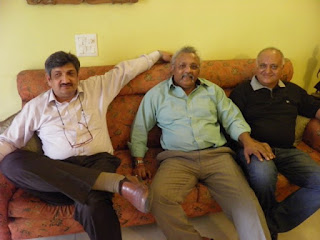 And to answer the question that was posed regarding my blood sugar situation during this brief get-together, I am posting the following pictures of the fasting and post prandial tests done yesterday.

[Guys – thank you for the concern. I know that these appear to be on the higher side as far as the existing belief systems go but I do happen to know what I am doing.]
BTW, if these are the results of the blood tests yesterday, I am sure they were not much different on the days that I was driving!!!!
Now what do the doctors have to say to that???
And so it is.
Friday. March 23, 2012